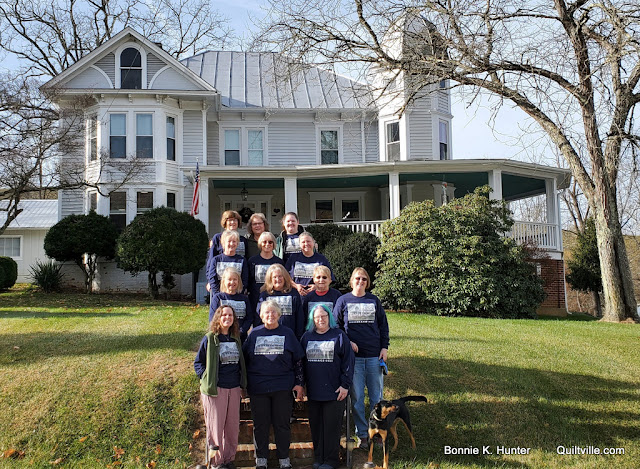 It was a intermittently sunny Saturday – but don’t let that sunshine fool you!  it was just a tad bit chilly as we filed out of the front door, down the steps and into our “Short people in front, tall people in back” places for a round of group photos.
And YES!  There were custom shirts with a lovely photo of Quiltville Inn on the front – all arranged by Nola and the gang.  LONG SLEEVED!
What a great addition to my personal “Quilt Wear” collection – because, you know, it’s quilting shirts all the time. Every day. 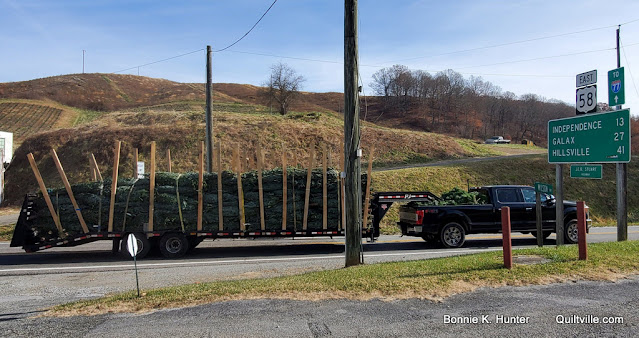 And the trucks hauling trees keep on a-rumbling by!

We didn’t let that November chill in the air stop us though, after lunch a group and I headed down to Bear Branch road to see if that cabin hidden by trees in the summer was more visible in the fall.
It’s been a couple of months since I came down this way – and it is fun to see it in another season. 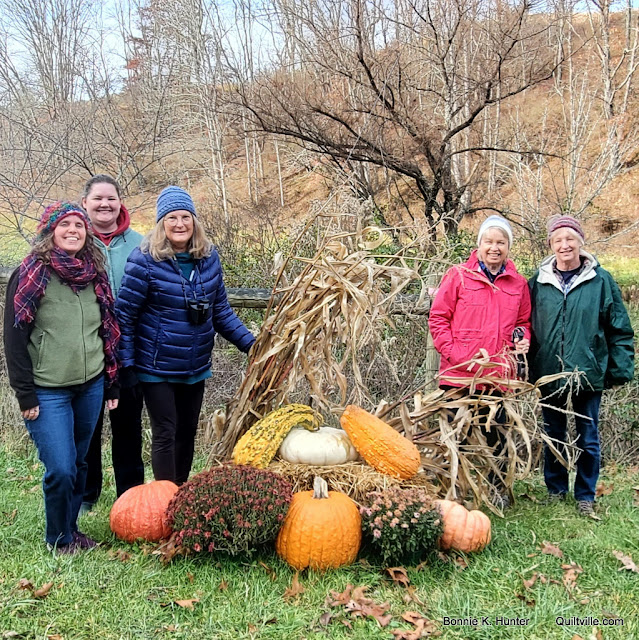 What a lovely view!
While walking we met an old guy on the road who was driving past us. He stopped to chat and we asked him questions about the area, especially this cabin and he said he grew up on this road (This is his barn!)

The cabin is visible now that the leaves are down.
He remembers the family that lived there and they were “poorer than dirt” as he recalls. ⁣

As close as I could zoom in without the photo getting too grainy.

Checking out the old car in the brush.
The story about the old car isn’t as interesting as we had made it up to be. (No bodies in the trunk!)
When I asked him about how the old car came to be there, he said, it simply stopped running one day, and unable to fix it, they just parked it off road and let nature take its course with it.
The broken windshield could have been cased by falling branches – or mischievous vandals over the years. Who knows.
When we told him that I own the old Field’s house and am running it as a Quilter’s Retreat, he told us that while in high school he dated one of the Field’s daughters.⁣
The story of that daughter is a bit on the tragic side – it was the 1960s. She had taken a job in San Francisco after college during the hippie years, found herself addicted to drugs, and ended her life by jumping off the Golden Gate Bridge.⁣
I drew an instant parallel to that story time-line realizing that was happening when I was in grade school in nearby San Jose – less than an hour’s drive away from San Francisco, not even dreaming that I would someday own the house this young woman from Virginia grew up in.⁣
(Okay, that is a crazy long run-on thought process going multiple directions but there you have it.)⁣
Take the time to listen to the stories of strangers. You never know what connections you might find.

Just a little babbling brook burbling by!
This is a collage and you might need to arrow to the 4th frame to see the video.

A bit more to this story too –
This house, further on up the road, supposedly belonged to the landlord of the falling down cabin.
No one lives in it or is currently renovating it.  It’s part of an 800 acre or so cattle operation.  I need more info on this story!  There is still a lot to learn. 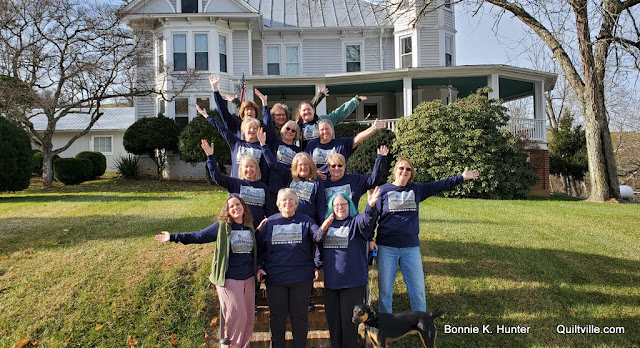 The Bonniacs are on their way home to Indiana this morning – and I still have more photos and videos to share, so will spread them out just a bit.