My world became winter white starting around midnight on Friday morning.
Not that I was awake to see it all start – I didn’t catch it until daylight’s arrival.  Stretching and yawning, opening the window blinds to find that my world had taken on a snow globe appearance.
And it continued to fall all day long.

There is something to be said for the joy of a snow day – even a snowed in weekend – when you don’t have to worry about catching a flight out anywhere.
By afternoon it was still coming down.  Click to Play:

It really was beautiful. All day long.  So much peace – and it was just what I needed to be surrounded by.

That pork tenderloin I talked about?  I gave up on the crock pot idea and went for the air fryer instead: 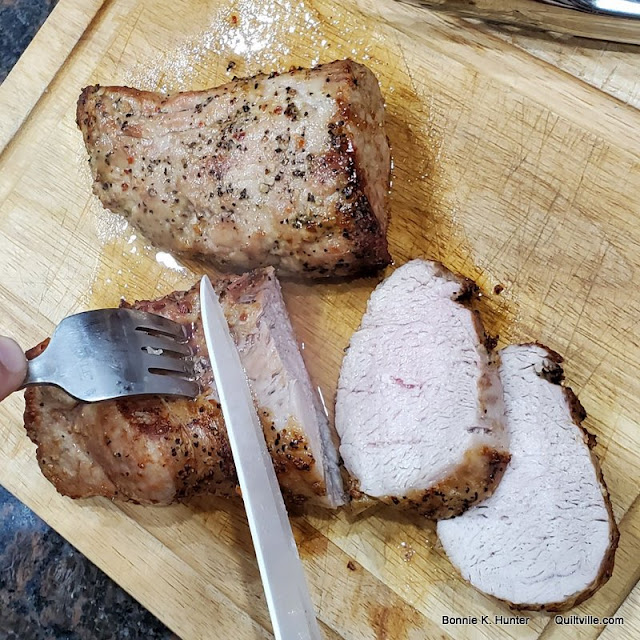 I wish you could smell this. It was sumptuously delicious.  You could cut it with a fork, no knives required.

And simple!  Not a recipe really – I started with a pre-marinated and garlic & herb seasoned tenderloin.
I removed the tenderloin from the package, and coated it with about 1 tablespoon of olive oil to prevent drying out.
I cut it into two pieces so it would fit the air fryer basket.  Preheat the air fryer at 400 degrees for about 5 minutes.  Place the tenderloin pieces in the basket.  Cook at 400 for about another 20 minutes. until internal temperature reaches 145-160 degrees.
Let tenderloin rest on cutting board for about 5 minutes before slicing and serving.
That was it.  It was AMAZING.
I served it up with baked sweet potatoes, steamed broccoli and a salad.

Just Another Day in the Scrap Mines! (Gift-Away!)